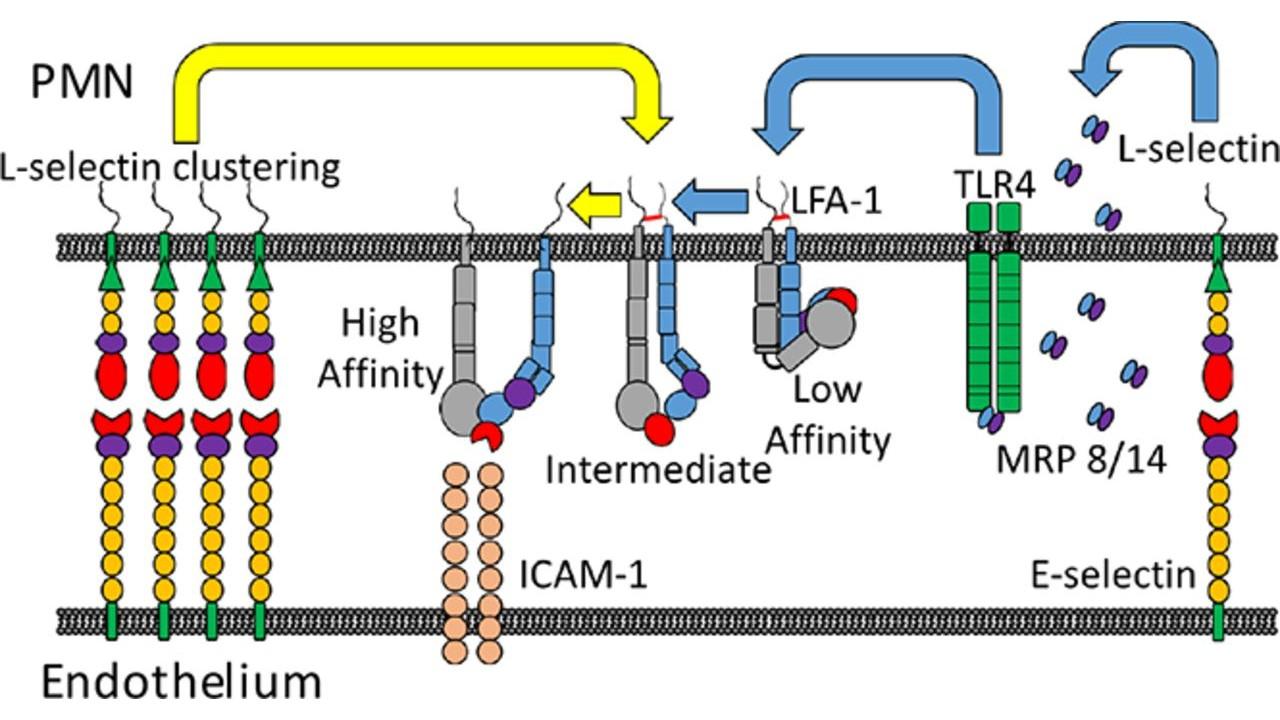 Neutrophils are a circulating “first responder” white blood cell that protects the host from infection and help to heal injured tissues. They can access any site in the body by travelling in the blood stream and use specialized adhesion receptors to capture and migrate through the wall of blood vessels at the site of the injury.

Chemical signals instruct neutrophils to “roll” through the vasculature and activate anchor molecules called integrins. Scientists have discovered some of chemical signaling pathways, but others are less well known, especially those critical for targeting white cells under different disease conditions.

However, L-selectin/E-selectin are also shear sensitive, meaning that at specific blood flow rates the bonds function analogous to a Chinese finger trap– the more force you apply the stronger the bond between the cell and vessel wall. To better understand the role played by E-selectin, first author Vasilios Morikis, a graduate student in the Simon Lab, used Rivipansel to block the ability of E-selectin to form these force resistant bonds with L-selectin while still allowing for binding. They found that by blocking L-selectin, the E-selectin was unable to form the strong bonds required for adhesion and transport through the lining of the blood vessel.

Further study revealed that once force was applied to receptor clusters between E- and L-selectin bonds,  a chemical signal (within the neutrophil) was transmitted from the outside-in that then completed a circuit to activate β2-integrin, pushing it one step further toward the state where the neutrophil can bind strongly to the endothelium, stopping the neutrophil from rolling and committing it to migrate into the tissue.

“Our work describes a non-classical pathway through which selectin signalling activates the cell,” says Morikis. “It enhances our knowledge of selectin mediated pathways for neutrophil activation.

The paper was published in the November issue Blood, which also selected an image from the article as a cover image and included it in an editorial review.