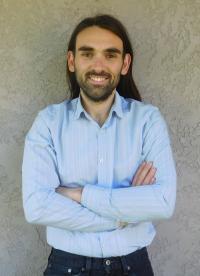 Dr. Gerard Ariño-Estrada, an assistant project scientist in the Cherry Lab, has received an R01 award from the National Institutes of Health (NIH) to develop a gamma detection system that will improve the quality control of radiotherapy using protons and improve its efficacy. In this award, Dr. Ariño-Estrada is leading a collaboration with Radiation Monitoring Devices, Inc. (Watertown, Massachussetts), Lawrence Berkeley National Laboratory, and the Department of Radiation Oncology at UC San Francisco, which constitute a team that encompasses expertise in material science, radiation detectors, image reconstruction, and radiotherapy.

Proton therapy has the potential to provide better efficiency and lower toxicity compared to conventional radiotherapy, however, the current limitations in assessing the proton beam delivery location do not allow it to exploit its benefits. The goal of this project is to build a prototype system based on thallium bromide Cherenkov Charge Induction (TlBr CCI) detectors that Dr. Ariño-Estrada has pioneered at UC Davis. The system aims to resolve proton beam delivery with a spatial accuracy of 2-3 millimeters in a few seconds to allow it to monitor the beam position continuously, maximize the dose delivery to the tumor, and reduce toxicity in healthy organs.

Dr. Ariño-Estrada obtained his PhD from the Universitat Autònoma de Barcelona, Spain in 2015. He joined BME in March 2016 as a postdoc and became a project scientist in July 2018. During his appointment at BME he has also obtained two other R03 and R21 awards from NIH as a principal investigator. Besides his primary focus on developing radiation detectors for medical applications, he has also contributed to joint projects between BME and the Departments of Plant Sciences, Electronic and Computer Engineering and the School of Veterinary Medicine.