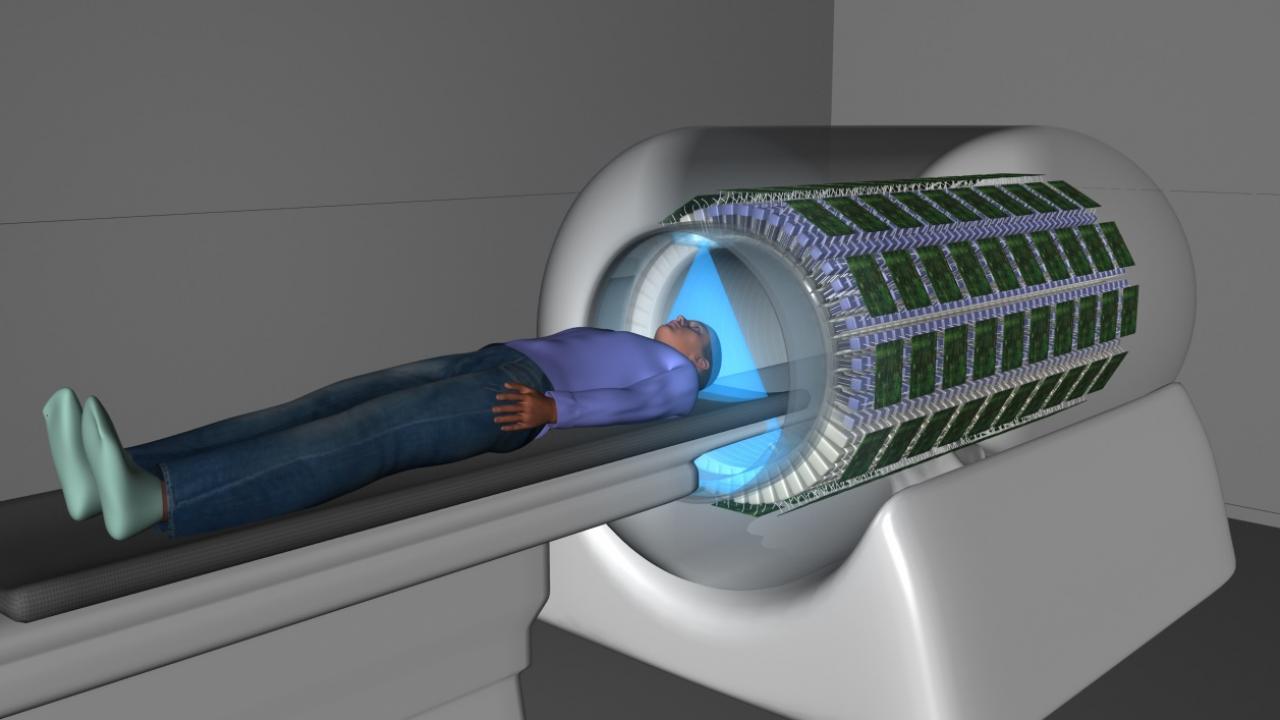 Positron emission tomography (PET) is a molecular imaging technique widely used in clinical diagnostics and clinical research. More than 99% of the imaging signal is currently being wasted because only a small segment of the body (typically 15-20 cm) is imaged at any one time. This leads to relatively long imaging times and radiation doses large enough to limit the broader application of PET.

“The vision of the EXPLORER project is to solve two fundamental limitations of PET as it is currently practiced,” said Cherry. “The first is to allow us to see the entire body all at once. The second huge advantage is that we’re collecting almost all of the available signal, which means we can acquire the images much faster or at a much lower radiation dose. That’s going to have some profound implications for how we use PET scanning in medicine and medical science.”

EXPLORER will simultaneously image all the organs and tissues in the body and will enable PET imaging studies of the whole body to be performed using 1/40th the radiation dose, or in 1/40th of the time (potentially in a single breath-hold), or with 40-fold better signal. At 1/40th of the radiation dose, the radiation exposure is equivalent to that received on a round-trip transatlantic flight. This change will revolutionize the way in which PET is used in research and ultimately in the clinic. Total-body PET will create the opportunity to study multi-system diseases at the molecular level for the first time. Scientists and doctors will be able to measure interactions between multiple organs at a variety of levels of analysis all at once, for example opening new ways to view disorders associated with brain/gut and brain/immune system interactions, as well as imaging sites of  inflammation and infection, tracking emerging cellular therapies, and imaging the distribution of new drugs inflammation.

In pediatrics, EXPLORER’S substantially shortened scan time will reduce the risks associated with anesthesia, and in some cases, will completely eliminate the need for anesthesia. Studies performed at 1/40th the current radiation dose with no loss of image quality will allow researchers and clinicians to perform multiple PET studies in a range of chronic  diseases, including metabolic syndrome, diabetes, arthritis, psychiatric disorders (especially in adolescents), and greatly easing the radiation burden associated with antibody  imaging. In research, the dynamic range of EXPLORER would be sufficient to permit imaging of radiotracers over ~7-9 half-lives, compared to ~2-4 half-lives with current devices, allowing new insights into the long term fate (up to one month after injection) of biomolecules in humans.

Additionally, pharmaceutical companies could use the scanner to show how drugs and compounds are transported through the body and determine whether a drug is targeting the disease or whether it goes to other organs, where it could cause harmful side effects.

EXPLORER will employ nearly 2000 modular “block” detectors, giving an axial FOV of approximately 2 meters. The device is expected to weigh more than ten tons and to consume ~60 kW of power. Running flat-out, it could generate 40 TB of data in a single day. Four to six racks of computers will be needed to process and store this data.

“There are many questions that we couldn’t possibly ask before — and now we will be able to ask them,” Badawi said. “This is not just a big instrumentation grant. It’s going to give us a tool that will allow us to see things we’ve never seen before.”

Cherry and Badawi have been working on the project for the past ten years, and have already developed a computer model of the scanner and tested feasibility of many of the necessary building blocks for this scanner. The award now comes at a time when technology has caught up with the vision, making it possible to efficiently process all the data generated from the half a million detectors needed for a total-body scanner. The new Transformative  Research Award will support building the first total-body PET scanner prototype. Other lead investigators are Jinyi Qi (Biomedical Engineering, UC Davis), Terry Jones (Radiology, UC Davis), William Moses (Lawrence  Berkeley National Laboratory), and Joel Karp (Radiology, University of Pennsylvania).

Down the road, the team hopes to see the technology commercialized, ultimately making it available to hospitals and researchers worldwide.

“This is the project of my career, no question,” said Cherry. “It’s an amazing privilege and responsibility to work on something of this scale that has the potential to have so much impact in biomedical research and health.”