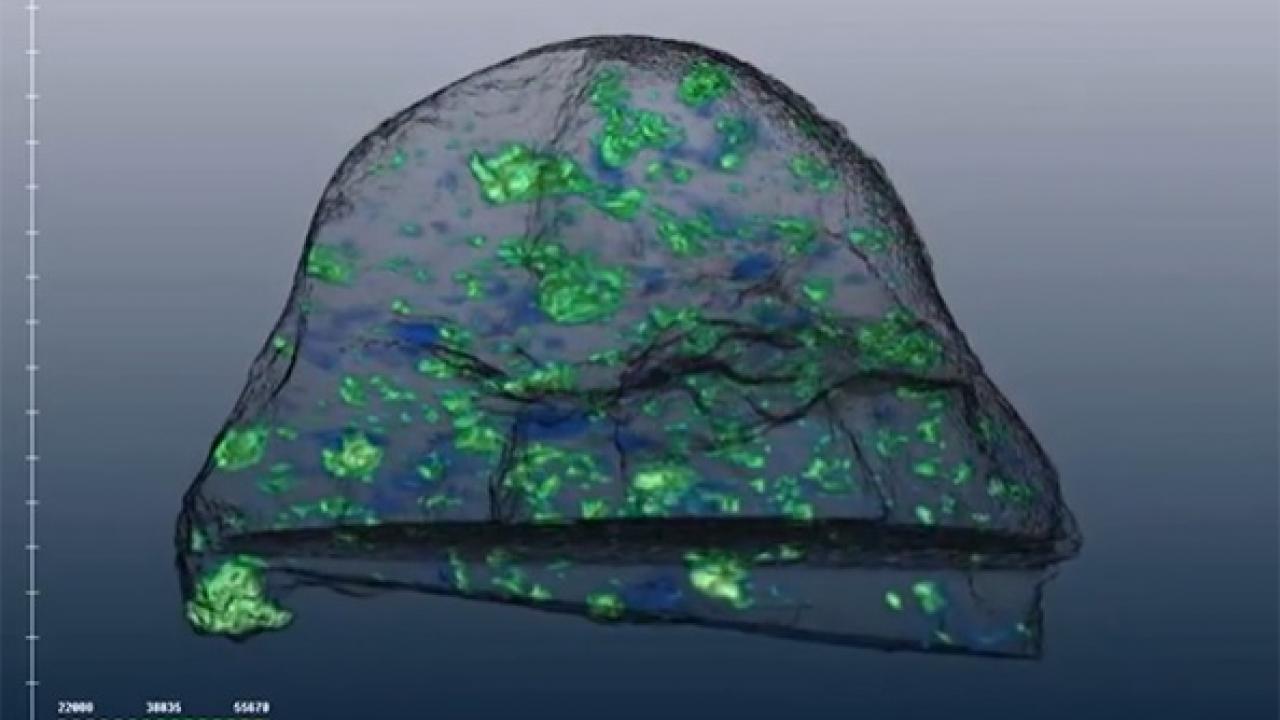 The meteor that exploded over Chelyabinsk, Russia, in February 2013 was “a wake-up call,” according to a University of California, Davis, scientist who participated in analyzing the event. The work is published Nov. 7 in the journal Science by an international team of researchers.

“If humanity does not want to go the way of the dinosaurs, we need to study an event like this in detail,” said Qing-zhu Yin, professor in the Department of Earth and Planetary Sciences at UC Davis.

Chelyabinsk was the largest meteoroid strike since the Tunguska event of 1908, and, thanks to modern technology from consumer video cameras to advanced laboratory techniques, provides an unprecedented opportunity to study such an event, the authors note.

The Chelyabinsk meteorite belongs to the most common type of meteorite, an “ordinary chondrite.” If a catastrophic meteorite strike were to occur in the future, it would most likely be an object of this type, Yin said.

The team was led by Olga Popova of the Russian Academy of Sciences in Moscow, and by NASA Ames and SETI Institute meteor astronomer Peter Jenniskens, and included 57 other researchers from nine countries.

“Our goal was to understand all circumstances that resulted in the damaging shock wave that sent over 1,200 people to hospitals in the Chelyabinsk Oblast area that day,” said Jenniskens. The explosion was equivalent to about 600 thousand tons of TNT, 150 times bigger than the 2012 Sutter’s Mill meteorite in California.

Based on viewing angles from videos of the fireball, the team calculated that the meteoroid entered Earth’s atmosphere at just over 19 kilometers per second, slightly faster than had previously been reported.

“Our meteoroid entry modeling showed that the impact was caused by a 20-meter sized single chunk of rock that efficiently fragmented at 30 km altitude,” Popova said. (A meteoroid is the original object; a meteor is the “shooting star” in the sky; and a meteorite is the object that reaches the ground.)

The meteor’s brightness peaked at an altitude of 29.7 km (18.5 miles) as the object exploded. For nearby observers it briefly appeared brighter than the sun and caused some severe sunburns.

The team estimated that about three-quarters of the meteoroid evaporated at that point. Most of the rest converted to dust and only a small fraction (4,000 to 6,000 kilograms, or less than 0.05 percent) fell to the ground as meteorites. The dust cloud was so hot it glowed orange.

The largest single piece, weighing about 650 kilograms, was recovered from the bed of Lake Chebarkul in October by a team from Ural Federal University led by Professor Viktor Grokhovsky.

Shockwaves from the airburst broke windows, rattled buildings and even knocked people from their feet. Popova and Jenniskens visited over 50 villages in the area and found that the shockwave caused damage about 90 kilometers (50 miles) on either side of the trajectory. The team showed that the shape of the damaged area could be explained from the fact that the energy was deposited over a range of altitudes.

The object broke up 30 kilometers up under the enormous stress of entering the atmosphere at high speed. The breakup was likely facilitated by abundant “shock veins” that pass through the rock, caused by an impact that occurred hundreds of millions of years ago. These veins would have weakened the original meteoroid.

Yin’s laboratory at UC Davis carried out chemical and isotopic analysis of the meteorites. Professor Ken Verosub, also of the Department of Earth and Planetary Sciences, measured the magnetic properties of metallic grains in the meteorite.

Doug Rowland, project scientist in the Center for Molecular and Genomic Imaging at the UC Davis Department of Biomedical Engineering, contributed X-ray computed tomography scanning on a 0.53g fragment of Chelyabinsk, C3-3-4, using the Center’s MicroXCT-200 specimen CT scanner (Xradia Inc.). The meteorite density was calculated to be 3.30 g/cc which is in line with other similar meteorite fragments. The X-ray CT also revealed that this fragment was composed of iron-nickel and iron-sulfide compounds. The CT also reveals fractures, void spaces and the chondritic structure in non-destructive fashion. A video made from the images obtained by CMGI are here: UC Davis website at http://www.youtube.com/user/YinLabatUCDavis or at http://www.youtube.com/user/CMGIPreclinical/

In addition the CT data was used to measure the iron metal to iron sulfide ratios. This was used to help identify that the meteor is a breccia, with the brecciation being impact related.

Put together, these measurements confirmed that the Chelyabinsk object was an ordinary chondrite, 4,452 million years old, and that it last went through a significant shock event about 115 million years after the formation of the solar system 4,567 million years ago. That impact was at a much later date than in other known chondrites of the same type, Yin said, suggesting a violent history.

Jenniskens calculated that the object may have come from the Flora asteroid family in the asteroid belt, but the chunk that hit the Chelyabinsk area was apparently not broken up in the asteroid belt itself. Researchers at the University of Tokyo and Waseda University in Japan found that the rock had been exposed to cosmic rays for only about 1.2 million years, unusually short for rocks originating in the Flora family.

Jenniskens speculates that Chelyabinsk belonged to a bigger “rubble pile” asteroid that broke apart 1.2 million years ago, possibly in an earlier close encounter with Earth.

The rest of that rubble could still be around as part of the near-earth asteroid population, Jenniskens said.

Yin noted that major meteorite strikes like Tunguska or Chelyabinsk occur more frequently than we tend to think. For example, four tons of material were recovered from a meteor shower in Jilin, China in 1976.

“Chelyabinsk serves as unique calibration point for high energy meteorite impact events for our future studies,” he said. Technology for early detection of these objects is needed, Yin said — such as the Large Synoptic Survey Telescope, currently being developed by an international team headed by UC Davis physics professor J. Anthony Tyson.

The work was supported by the Russian Academy of Sciences, the Office of the Governor of Chelyabinsk Oblast, NASA and the Academy of Finland.