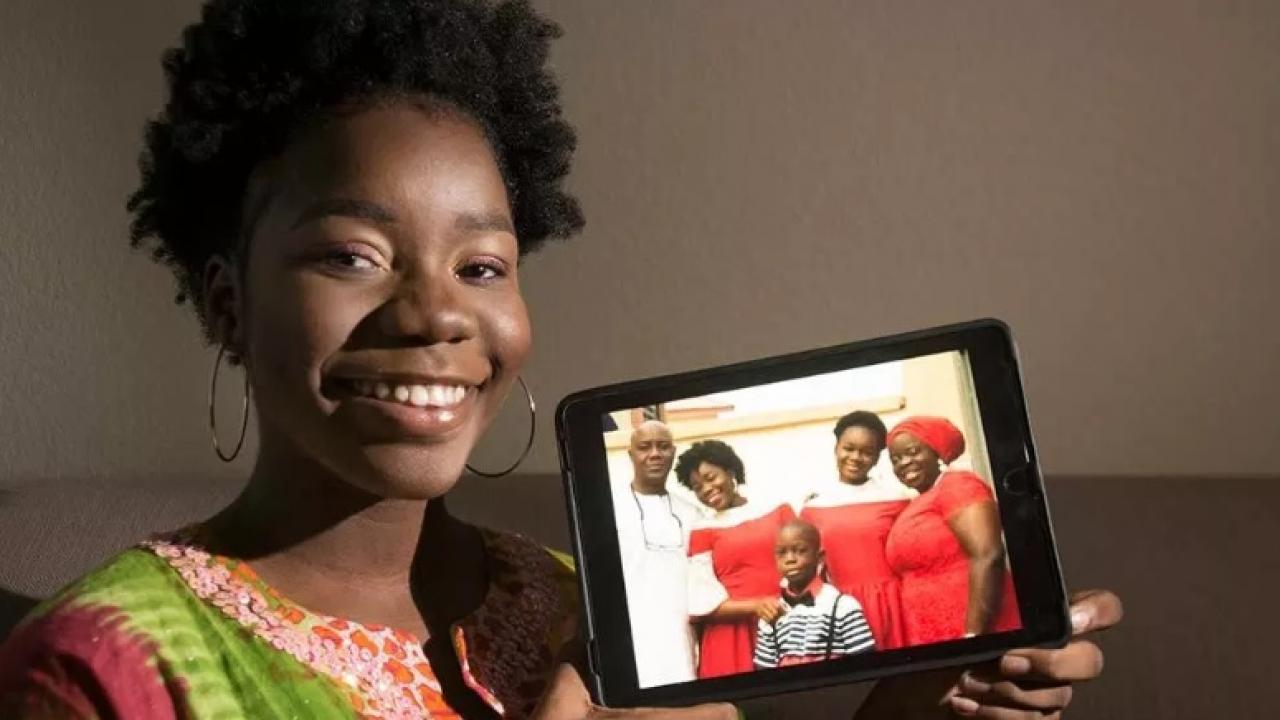 On the Fast Track

At 19, Nkechinyere Chidi-Ogbolu is like any other teenage girl — except that she just finished her first year as a Ph.D. student in the UC Davis biomedical engineering program.

Chidi-Ogbolu graduated from her high school in Nigeria at age 14. From there, she moved across the globe to attend Howard University in Washington, D.C., where she received her degree in chemical engineering.

As an exceptionally young student, Chidi-Ogbolu said she stayed on course thanks to her parents and two siblings.

Now as a student at UC Davis, Chidi-Ogbolu said she texts her sister every day, and her family calls her often — despite the nine-hour time difference between Nigeria and California.

“My sister is my best friend,” Chidi-Ogbolu said. “I’m close with my brother, but when I left home, he was still 3 years old. My sister’s his best friend. It’s not fair — she has two best friends.”

She tells the story of her fast track in a book detailing her experiences as a college student, Tales of an Uber Minor in College, which she published this past December.

“The point of the book was to make me seem like a human, because right now people keep putting me on this pedestal of genius,” Chidi-Ogbolu said. “You can totally do what I’ve done, or you can do better than what I’ve done. There’s nothing special about me that got me to this place.”

She is currently using her book as a platform for encouraging students to seek a higher education despite financial or social challenges.

Growing up, Chidi-Ogbolu said she always knew she wanted to get a Ph.D. Though she initially considered becoming a doctor, her interest in problem-solving led her to pursue engineering.

Chidi-Ogbolu said she chose Howard University because of its historically black community, which she added made the transition from Nigeria to the United States easier. At Howard, Chidi-Ogbolu discovered a large Nigerian community — a “home away from home” if she ever sought familiar surroundings.

“I miss my family, but I’m always connected to them, so it doesn’t feel like that much of a void,” Chidi-Ogbolu said.

During her sophomore year, Chidi-Ogbolu began to question her studies, and called to tell her mother she wanted to drop out and pursue her passion for singing. People had told her she could find success in the music industry, but she expected her mother to be less than enthused.

Instead, her mother brought up Falz, a Nigerian musician and Chidi-Ogbolu’s celebrity crush at the time. Before pursuing music, Falz had received a law degree from University of Reading in England.

“The fact that he had gone so far in his education [was] kind of reflected in his music, in the way he put his music together,” Chidi-Ogbolu said. “I wanted to be at the same level as somebody that I could admire.”

With her mother’s support and subtle advice, Chidi-Ogbolu finished her degree and joined the UC Davis Atmospheric Science Bilateral Graduate Missions Pathway Program. During the program, Chidi-Ogbolu took interest in disease and human body research, ultimately enrolling in the biomedical engineering program. In addition to her studies, Chidi-Ogbolu is currently involved in the Designated Emphasis in Biotechnology Program, which educates graduate students on ways to transition into industry.

“I still didn’t want to be a doctor, but I want to impact people health-wise,” Chidi-Ogbolu said. “It was like a behind-the-scenes way of me helping out in the health industry.”

She has now found herself a home in Davis.

“I’ve always felt like my home is wherever I make it,” she said.