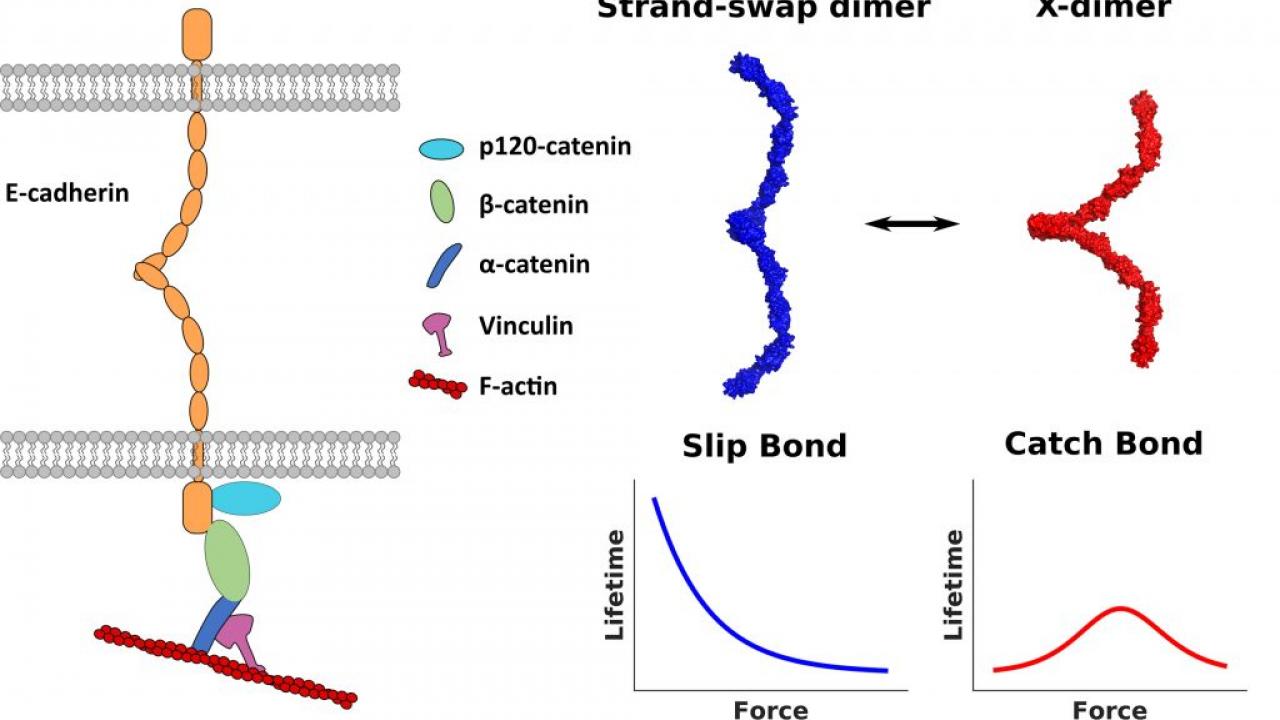 A fundamental question in cell biology is, how do cells control how strongly to stick to each other? Sometimes, cells need to be quite tightly glued together, for example in the lining of a blood vessel. At other times, they need to be able to peel apart. Understanding how cells can stick or unstick from each other is important for understanding tissue growth and wound healing. Cancers metastasize when tumor cells can come unstuck from a tumor and spread to other tissues.

Cadherins are proteins that cross cell membranes and connect with cadherins on other cells, allowing cells to stick together. Cadherins can bond either through stronger strand-swap dimers or weaker X-dimers. (Sivasankar lab)

Proteins called cadherins let cells stick together. New work by biomedical engineers at UC Davis shows how cells can switch cadherins between a more- and less-sticky form. The work is published the week of July 19 in Proceedings of the National Academy of Sciences.

Cadherins are proteins which go through the cell membrane. The outside part of the protein can interact with cadherins on other cells, and an inner part dangles inside the cell. The outside part of cadherin can stick to cadherin on another cell in two forms: A relatively weak X-dimer, and the stronger strand-swap dimer.

Graduate students Ramesh Koirala and Andrew Priest, working with Professor Sanjeevi Sivansankar in the UC Davis Department of Biomedical Engineering, developed an experiment to measure the interactions of single cadherin molecules with each other. They mounted single cadherin proteins on the tip of an Atomic Force Microscope and let them interact with cultured cells. They were able to study events inside the cells and how they affected the strength of interaction between cadherins.

They found that the part of the cadherin protein inside the cell interacted with proteins that bind actin, including vinculin. Actin is a protein that self-assembles in long rigid strands that form the skeleton inside cells.

“Our results demonstrate the inside-out regulation of cadherin conformation and establish a mechanistic role for vinculin in this process,” the authors wrote.

The work was the result of five years of intense effort by Koirala and Priest, who are co-first authors on the article, as well as a host of collaborators, Sivasankar said.

“While the research is fundamental, it has deep implications in understanding how tissue are formed, how wounds heal and why this process goes awry in cancer,” he said.

Additional authors on the paper are: Joleen Cheah and Soichiro Yamada at UC Davis; Chi-Fu Yen, Iowa State University; Willem-Jan Pannekoek and Martijn Gloerich, University Medical Center Utrecht, The Netherlands. The work was partly supported by grants from the NSF and NIH.