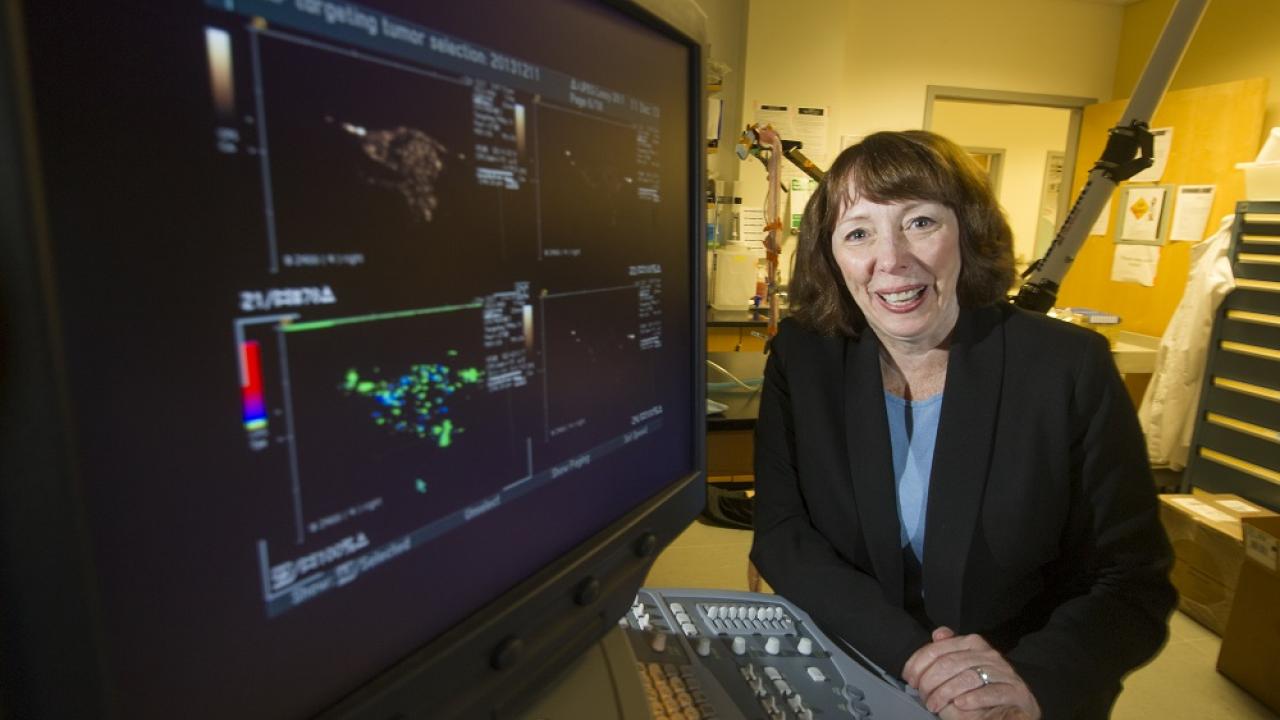 Distinguished Professor Katherine Ferrara, whose research has pioneered using ultrasound to image cancer and heart disease and who played a leadership role in establishing the Department of Biomedical Engineering at the University of California, Davis, has been elected to the National Academy of Engineering, the highest professional recognition for an engineer.

“This is a tremendous and well-deserved achievement,” said UC Davis Chancellor Linda P.B. Katehi. “Professor Ferrara’s research saves lives, and her election to the National Academy is proof positive from her peers that she is a national and international leader in her field.”

Ferrara was elected for her contributions to the theory and applications of biomedical ultrasound, according to the citation.

“I’m very grateful to my family, my colleagues at UC Davis, and to all the people who have worked so hard in my laboratory over the years, to make our achievements possible,” Ferrara said.

Ferrara’s current work explores new ways to use ultrasound in medical treatment. For example, anticancer drugs can be encased in tiny capsules that are injected into a patient’s bloodstream and steered toward the tumor with ultrasound. When the capsules reach the tumor, focused ultrasound bursts the capsules, releasing the drugs where they are most needed and reducing side-effects on other tissues and organs.

“I am delighted by the election of one of our distinguished faculty to the National Academy of Engineering,” said Enrique Lavernia, dean of the UC Davis College of Engineering. “Professor Ferrara is not only a distinguished academic, but also a leader who played a key role in the establishment of our now world-class biomedical engineering department.”

It was a personal tragedy that propelled Ferrara to follow her father, who worked on cardiac devices, into biomedical engineering. She worked with disabled children in high school and college, and initially earned a bachelor’s degree in physical therapy from the University of Pittsburgh. After the death of an infant daughter — partly due to limited diagnostic techniques available at the time — she returned to school to study engineering, aiming to work on new diagnostic devices.

Ferrara was a faculty member at Sacramento State, Cornell University and the University of Virginia, Charlottesville, before returning to UC Davis in 1999 to lead the new division of biomedical engineering. In 2001, the division became a full department, with Ferrara as founding chair. She was principal investigator on a $12 million award from the Whitaker Foundation, which made possible the early expansion of the department.

The Department of Biomedical Engineering currently has 33 faculty, 112 graduate students and 554 undergraduates enrolled in its programs, and over $18 million in research awards.

Ferrara is also the director of the Center for Content Rich Evaluation of Therapeutic Efficacy (cCRETE, pronounced “secrete”), funded through the Research Initiatives in Science and Engineering program established by the UC Davis Office of Research. The center brings together a team of cancer biologists, social scientists, bioinformatics experts and bioengineers to develop and test new types of assays that could be used to speed up the development of new therapeutic drugs.

Among other honors, Ferrara received the Achievement Award from the IEEE Ultrasonics, Ferroelectrics and Frequency Control Society in 2012, the top honor of this society. She is a fellow of the IEEE, American Association for the Advancement of Science, the Biomedical Engineering Society, the Acoustical Society of America, and the American Institute of Medical and Biological Engineering.

Ferrara is one of 67 new members announced Feb. 6 during the academy’s national meeting in Irvine, Calif. She is the 14th current or retired member of the UC Davis faculty to be elected to the prestigious academy, including Lavernia and Katehi. It is one of four organizations that make up the National Academies of the U.S., established by Congress to advise the nation on a wide range of scientific issues.