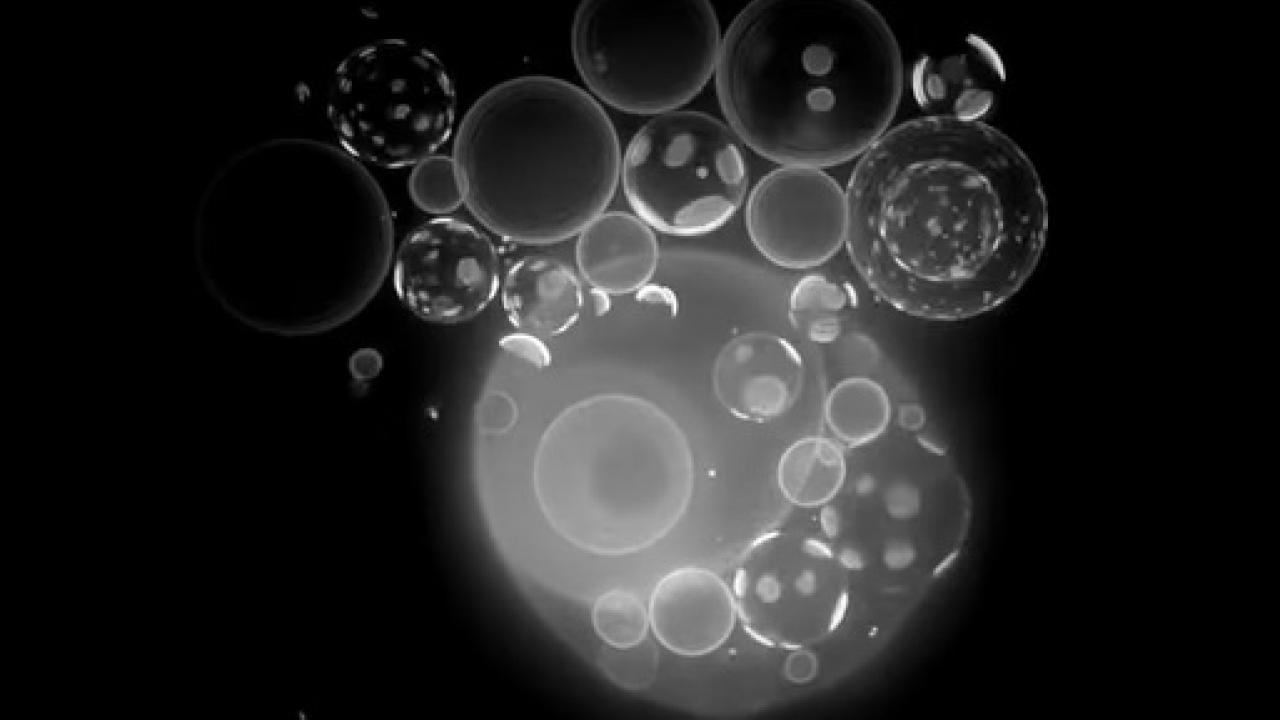 Tiny, soapy bubbles can reorganize their membranes to let material flow in and out in response to the surrounding environment, according to new work carried out in an international collaboration by biomedical engineers at the University of California, Davis, and Nanyang Technological University in Singapore. This behavior could be exploited in creating microbubbles that deliver drugs or other payloads inside the body — and could help us understand how the very first living cells on Earth might have survived billions of years ago.

The study, led by Atul Parikh, professor of biomedical engineering, and chemical engineering and materials science, was published Oct. 15 in the journal eLife.

Lipid vesicles are closed compartments within cells that isolate material dissolved in water from the rest of the cell. Most structures inside cells are surrounded by such a lipid membrane, as is the cell itself. Water can cross the membrane surrounding the vesicle, but dissolved material, such as salts, sugars or proteins, cannot. That means that when there is a higher concentration of dissolved material on one side of the membrane than the other, water will move by osmosis across the membrane to dilute it.

Place a vesicle in a solution that is weaker than its contents, and it will swell as water moves in; reverse the situation and the vesicle shrivels up. Eventually, swelling vesicles will burst.

Modern living cells have evolved complexes of proteins that can pump excess water or salts in and out of cells. But how did the very first cells cope with this problem?

Parikh and colleagues worked with artificial vesicles with membranes composed of a mixture of lipids that can either form a uniform mixture or, in the right circumstances, self-organize into distinct domains within the membrane. They used fluorescent dyes and a specialized microscope to watch the vesicles as they were subjected to different conditions.

When the solution outside was equivalent to the inside of the vesicle, the membranes were flaccid and evenly mixed. When they diluted the concentration of the solution outside, the vesicles swelled up as expected, but the membranes spontaneously organized into patchy domains. These domains grew and then dispersed in a remarkably cyclical way. As the domains grew, pores briefly formed in the membrane releasing some of the contents, then sealed up again.

In effect, these vesicles — made only of water, lipids and salts — are able to display a complicated behavior that lets them sense and react to their environment, the authors write.

Billions of years ago, such emergent behavior could have allowed the earliest living cells to adapt to changing environmental conditions. Today, it could be a factor helping to regulate vesicles inside modern living cells, or could help in designing synthetic vesicles and model protocells that might carry drugs to specific locations in the body, for example to treat tumors. It could also offer ways to tap chemical energy, stored as a concentration gradient, to drive reorganization of structures in membranes.

Co-authors on the study were Kamila Oglęcka, Bo Liedberg and Rachel Kraut, Nanyang Technological University, Singapore; and Padmini Rangamani, UC Berkeley. The work was funded by the U.S. Department of Energy and the Singapore Ministry of Education.