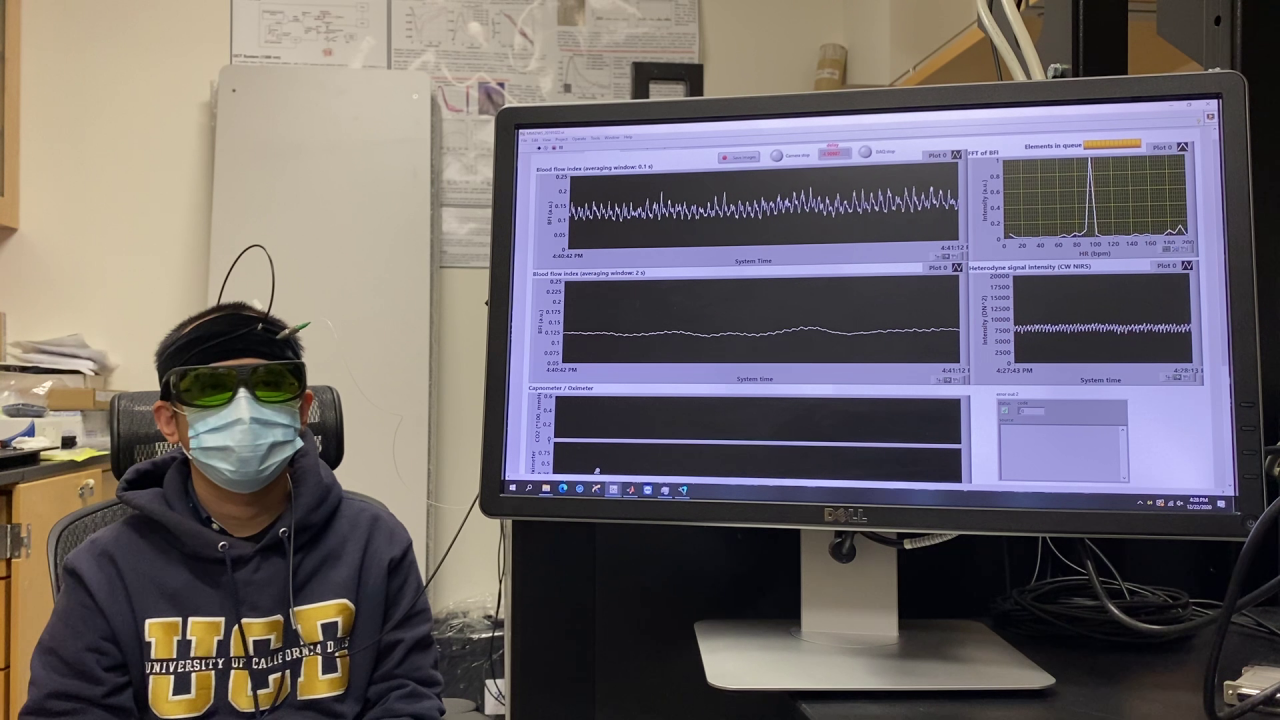 A new, noninvasive method for measuring brain blood flow with light has been developed by biomedical engineers and neurologists at the University of California, Davis, and used to detect brain activation. The new method, functional interferometric diffusing wave spectroscopy, or fiDWS, promises to be cheaper than existing technology and could be used for assessing brain injuries, or in neuroscience research. The work is published May 12 in Science Advances.

“Now we can assess how well the brain regulates blood flow, and even detect brain activation noninvasively in adult humans, using principles similar to functional magnetic resonance imaging (fMRI), but at a fraction of the cost,” said Vivek Srinivasan, adjunct associate professor of biomedical engineering at UC Davis and senior author on the study.

The human brain makes up 2% of our body weight but takes 15% to 20% of blood flow from the heart. Measuring cerebral blood flow is important for diagnosing strokes, and for predicting secondary damage in subarachnoid hemorrhages or traumatic brain injuries. Doctors who provide neurological intensive care, would also like to monitor a patient’s recovery by imaging brain blood flow and oxygenation.

Existing technology is expensive and cannot be applied continuously or at the bedside. For example, current techniques to image cerebral blood flow require expensive MRI or computed tomography scanners. There are light-based technologies, such as near-infrared spectroscopy, but these also have drawbacks in accuracy.

The new method takes advantage of the fact that near-infrared light can penetrate through body tissues. If you shine a near-infrared laser on someone’s forehead, the light will be scattered many times by tissue, including blood cells. By picking up the fluctuation signal of the light that finds its way back out of the skull and scalp, you can get information about blood flow inside the brain.

Naturally, that signal is extremely weak. Srinivasan and postdoctoral researcher Wenjun Zhou overcame that problem by making use of interferometry: the ability of light waves to superimpose, reinforcing or canceling one another. In particular, through interferometry, a strong light wave can boost a weak light wave by increasing its detected energy.

They first split the laser beam into “sample” and “reference” paths. The sample beam goes into the patient’s head and the reference beam is routed so that it reconnects with the sample beam before going to the detector. Through interferometry, the stronger reference beam boosts the weak sample signal.  This allowed the team to measure the output with the type of light-detecting chip found in digital cameras, instead of expensive photon counting detectors. They then use software to calculate a blood flow index for different locations in the brain.

Srinivasan and Zhou worked with Dr. Lara Zimmerman, Dr. Ryan Martin and Dr. Bruce Lyeth at the UC Davis Department of Neurological Surgery to test the technology. They found that with this new technology, they could measure blood flow more rapidly and deeper below the surface than with current light-based technology. They could measure pulsating cerebral blood flow and could also detect changes when volunteers were given a mild increase in carbon dioxide.

When volunteers were given a simple math problem, the researchers were able to measure activation of the prefrontal cortex through the forehead.

Additional authors on the paper are Oybek Kholiqov, Jun Zhu and Mingjun Zhao, all at the UC Davis Department of Biomedical Engineering. The work was supported by grants from the NIH. The university has applied for a patent on the technology.