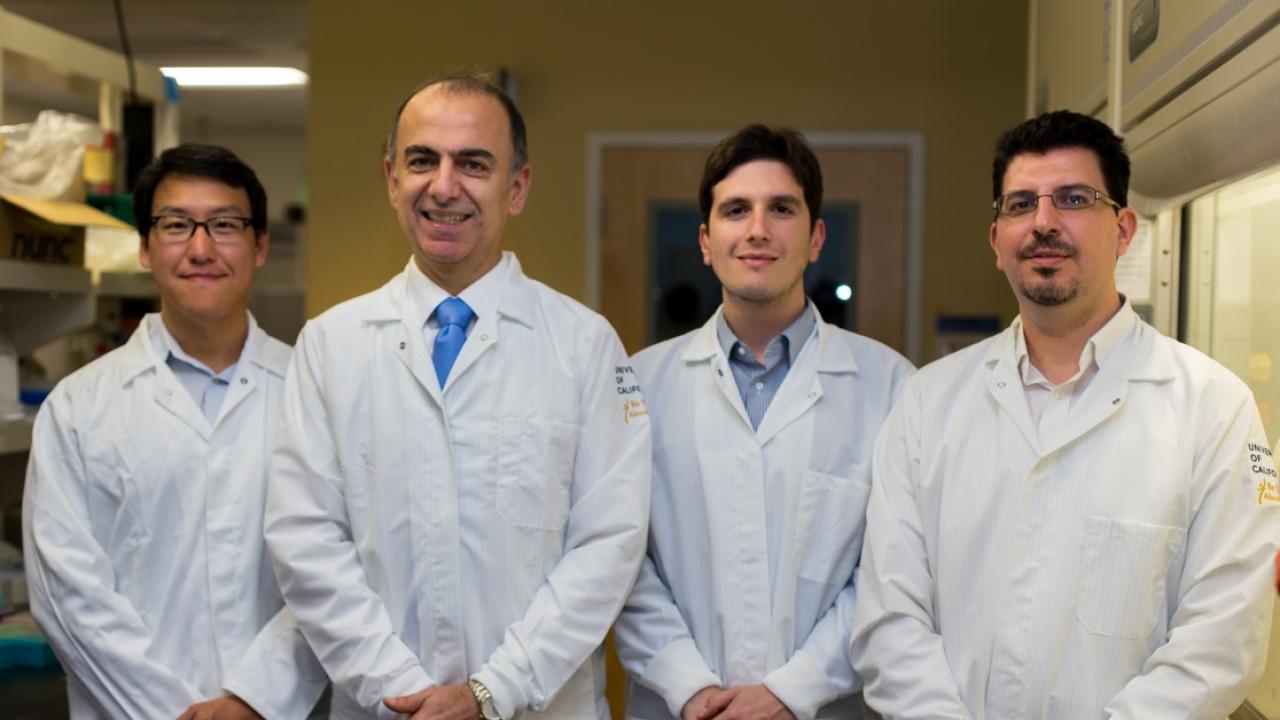 The research addresses an ongoing challenge regarding the limitations of lab-engineered tissues intended for use in the treatment of injuries and damage to joints and ligaments. Thus far, the mechanical properties of engineered cartilage remain far inferior to those of natural tissues, which obtain their strength and flexibility from a protein called collagen. Collagen, in turn, is produced by chondrocytes: cells that members of the Athanasiou lab have been culturing to produce artificial cartilage.

“As the major and most abundant structural protein in our bodies, collagen is the fabric underlying all our connective tissues,” Hu explains. “By demonstrating that we can modulate collagen crosslinks across a spectrum of cartilage and fibrocartilages, both native and engineered, this work is significant in opening the door to improving the function of all other connective tissues in the body, including skin, blood vessels, bones, and fascia.”

“Since the properties of engineered tissue currently remain far from native tissue values,” Makris notes, “it has become of utmost importance to develop methods that enhance the properties of engineered tissues, to result in biomechanically functional and clinically applicable implants. In this article, we investigated methods to enhance the structure of neotissues through modulation of an important component of a tissue’s matrix: the collagen crosslinks.”

The present study demonstrates, both in vitro and in vivo, that improvements in the mechanical properties of native and engineered tissues can be attained using the endogenous (hypoxia-mediated) and exogenous application of lysyl oxidase: the enzyme responsible for collagen cross-linking. The resulting successful methodology works across a spectrum of collagen-rich tissues, thus creating exciting new prospects for regenerative medicine. The goal is to engineer material that can endure the movement, strength and flexibility demands of a joint, at which point the work could progress to human clinical trials.

“Using tissue engineering approaches, we can convince cells to engineer tissue that is primarily made of soft collagen,” Athanasiou explains. “Let’s think of those collagen fibers as pieces of spaghetti. Crosslinks can be thought of as the areas where the spaghetti strands stick to each other. By sticking to each other, the strands end up producing stiff spaghetti. So, the significance of this work is that we identified ways to make tissues — such as cartilage, tendons and ligaments — exceedingly stiffer by convincing collagen strands to stick together. The applications can be enormous, as, conceivably, every collagenous tissue can be manipulated to maintain its mechanical properties.”

The UC Davis Musculoskeletal Bioengineering Laboratory‘s primary objective is to understand the healing process of musculoskeletal tissues, such as cartilage, and augment those processes via the application of tissue-engineering principles. Despite tremendous biomedical advances in the late 20th and early 21st centuries, cartilage regeneration remains a serious challenge. Tissues studied by the lab team — such as articular cartilage, the knee meniscus and the temporomandibular joint disc — have extremely demanding biomechanical functions, while exhibiting little to no intrinsic ability to self-repair.

Hu, the lab’s principal development engineer, also is director of the Clinical Translational Program. He joined the UC Davis College of Engineering in August 2009, after earning a doctoral degree in bioengineering from Rice University, where he also worked as a postdoctoral fellow and research scientist for four years.

Paschos completed his residency in orthopedic surgery at the University Hospital of Ioannina, in Greece; he also holds a master’s degree in emergency medicine, and a Ph.D. in musculoskeletal tissue biomechanics. He joined the Athanasiou lab in 2012, to conduct research in cartilage regeneration. Makris, also a postdoctoral fellow in the Musculoskeletal Bioengineering Lab, joined the UC Davis College of Engineering in 2010, in order to complete his Ph.D. thesis on cartilage tissue engineering.

Responte worked as a postdoctoral fellow at UC Davis for a year, after obtaining his Ph.D. in bioengineering in 2011, at Rice University under Athanasiou’s supervision; he now works as a senior test engineer at Zimmer, a San Diego-based medical device company, where he collaborates with the design, marketing and regulatory teams to develop test procedures for dental implants.

PNAS, established in 1914, is one of the world’s most-cited and comprehensive multidisciplinary scientific journals, publishing more than 3,800 research papers annually. The journal publishes cutting-edge research, science news, commentaries, reviews, perspectives, colloquium papers and actions of the National Academy of Sciences, with content that spans the biological, physical and social science, and is global in scope. Nearly half of all accepted papers come from authors outside the U.S.