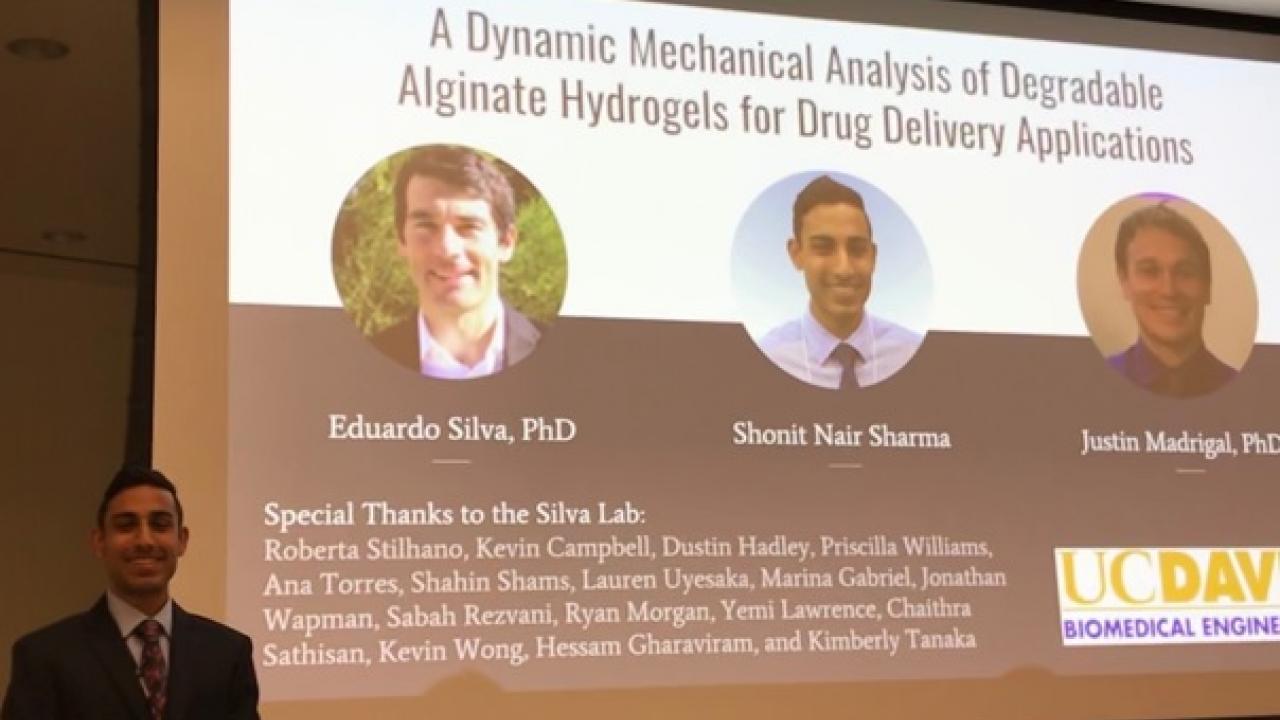 In his plenary lecture, “A Dynamic Mechanical Analysis of Degradable Alginate Hydrogels for Drug Delivery Applications,” Shonit presented his research on the influence that imparting degradative properties on alginate hydrogels has on the release kinetics of lentivectors. At the NCRC, plenary speakers are considered the most experienced undergraduate researchers, and they are given a special distinction as well as a travel stipend. Shonit was one of only 12 students chosen to deliver a lecture. Over 100 people attended Shonit’s plenary, followed by a lively question and answer session with private follow-up conversations afterward.

Shonit’s poster presentation expanded on the details of his 3-part experiment: performing gelation of alginate polymers to form hydrogels, measuring degradation of hydrogels, and quantifying release of large particles from hydrogels. The knowledge of the tunable degradability exhibited by alginate can prove useful in the controlled release of genetic vectors in the context of treating ischemic vascular disease—the leading cause of death worldwide. A panel of faculty judges awarded the poster a certificate and monetary prize for “First Place in Engineering, Mathematics, or Computer Science”.

Since his first year at UC Davis, Shonit has been conducting research in Eduardo Silva’s biomedical engineering lab, studying mechanical properties of degradable alginate hydrogels with the goal of designing injectable material systems for sustained delivery of therapeutic angiogenic vectors.

Professor Silva is proud of his mentee’s achievements. “It has been a delight to witness the level of commitment and quality of work that Shonit delivered over the past years. In this particular case, we are very happy with the award recognition that Shonit received. Fantastic!”

In undergoing his scientific quest for answers, Shonit explains “I had all the tools and resources to investigate my overarching research question, but realized it would take a creative, bottom-up approach to make meaning out of the data.”

By his third year, Shonit was leading a project to build, program, and test a digitally controlled open source syringe pump—a cost-effective alternative to commercial syringe pumps—for widespread use in research laboratories. Now in his senior year, he promotes and fosters relationships between students and faculty, with the goal of empowering other undergraduate students to conduct their own research, as Director of Research Development of the Biomedical Engineering Society at UC Davis. After graduating, Shonit plans to attend medical school, continuing to research and apply his knowledge in the medical field to advance healthcare.

Though his journey has led to a prestigious prize, the real treasure for Shonit is the world of research he has joined.

“Understanding that I am part of a large community that is pushing the limits of the scientific knowledge is why I choose to do research; that this research has a widespread positive impact and generates enthusiasm for scientists and students to work as teams, collaborating to benefit humankind is why I look forward to going into Dr. Silva’s lab each day.”