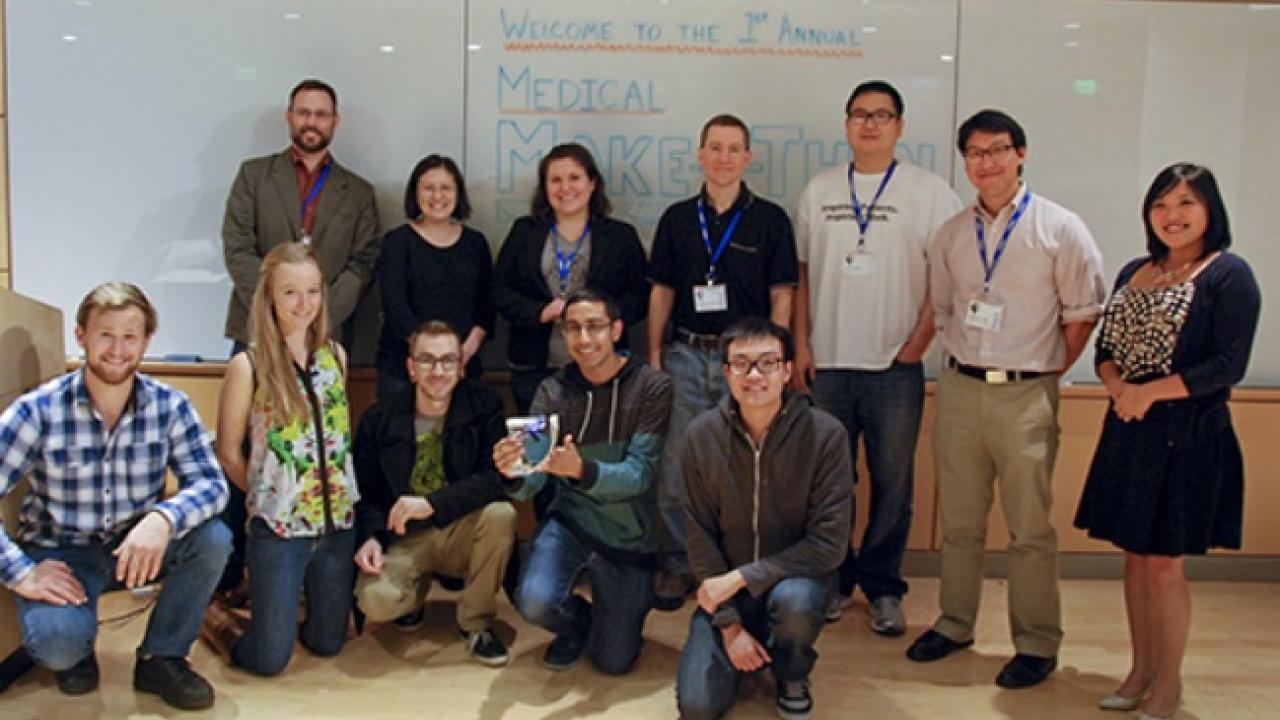 The award-winning University of California, Davis (UC Davis) student chapter of the Biomedical Engineering Society (BMES) has come up with a unique way to give students hands-on experience implementing a solution to a real world problem: Make it a competition and make it fun!

Make-a-thon is a competition between multiple student teams to learn the design process… in 30 hours! “It’s the design process on steroids,” said Dr. Anthony Passerini, Associate Professor of Biomedical Engineering, and the director of the senior design program. “The teams were doing over two days what they normally do over two quarters. They were highly constrained by time, materials, and manufacturing techniques. It was a great learning experience and a lot of fun for everyone.”

“We are so thankful for the support of ASUCD, our College and Department, the national BMES organization, and Genentech,” Rose Hong Truong, President of UC Davis BMES, noted. “The event would not have been possible without them and the TEAM Design, Prototyping, and Fabrication Facilities.”

Over the weekend, teams worked on a problem that was a tightly guarded secret for weeks prior to the event. The bigger the problem, the more fun, right? Is asking the students to come up with a device that could help scientists save bats from extinction and, along with them, our agricultural economy, big enough?

White-nose syndrome, caused by Pseudogymnoascus destructans, is a recently recognized fungal killer of hibernating bats that is spreading rapidly across North America. Several once abundant bat species may now be placed on the endangered species list. White-nose syndrome has wiped out up to 90% of some bat colonies and up to 80% of the entire population of bats that hibernate in caves in the northeastern US.

Bats are among the most important consumers of insects that plague agricultural crops. The economic losses due to the reduction in insect suppression are estimated to be anywhere from $4 billion to $50 billion. Finding a way to alleviate or treat white-nose syndrome is critical to the population health of at least seven species of bats.

Dr. Kevin Keel, a board-certified veterinary pathologist, and Dr. Barbara Shock, a wildlife disease ecologist, at the UC Davis School of Veterinary Medicine, first approached Steven Lucero, TEAM Facilities manager, to develop a skin biopsy tool, which became the focus of the Make-a-thon. “Our research is an attempt to find ways to mitigate the mortality of bats in affected caves. Using tissue explants as a model of infection is a powerful tool that enables us to mimic the infection on bats to better understand how we might be able to limit its growth on the skin. Any tool that makes this more efficient could help us find better ways to help bats,” said Dr. Keel.

The sixty participants of the Make-a-thon were asked to design a single tool that would minimize handling of the bat, while being highly portable and easy for one person to use. The tool needs to cut the tiny piece of skin while adhering it to a support so that it is stretched for histological purposes. A single field tool that can be used by one person and does not require a cutting board will be both simpler for biologists and faster and easier for bats.

Faculty and industry judges evaluated each design and advanced four of the most feasible projects, two from UC Davis and two from the University of Southern California (USC), to the prototyping phase of the competition. These projects had full assistance from the UC Davis TEAM Design, Prototyping, and Fabrication Facilities to produce working prototypes of their designs. After testing the designs, Aaron Kho, E. Aaron Cohen, Lucas Murray, Natalya A. Shelby, and Shonit Sharma of UC Davis were the Overall Winners. Their device was inspired by a piercing gun. When tested, the prototype successfully cut through a bat wing in the laboratory. Awards for Most Potential and Most Creative went to teams from UC Davis and San Jose State University, respectively.

“It was truly remarkable seeing the diversity of designs,” says Dr. Jennifer Choi, Teaching Assistant Professor in Biomedical Engineering, and one of the faculty judges for the event. “When I spoke to the participants, they were all very excited in being able to play a significant role in further understanding this critical syndrome.”

Dr. Jerry C. Hu, Assistant Director of the TEAM Facilities, commented, “By bringing out the passion and creativity from students, hands-on design experiences like these are critical in inspiring them to learn. We had one team consisting only of freshmen and sophomores who learned to CAD overnight! The Make-a-thon is illustrative of TEAM’s mission to benefit education, research, and the community at large. We are excited to start manufacturing the winning prototype for researchers to use across the US before the bats come out of hibernation!”

The event occurred January 17-18, 2015, and took place in the TEAM Design, Prototyping, and Fabrication Facilities, in the Genome and Biomedical Sciences Facility, at UC Davis.