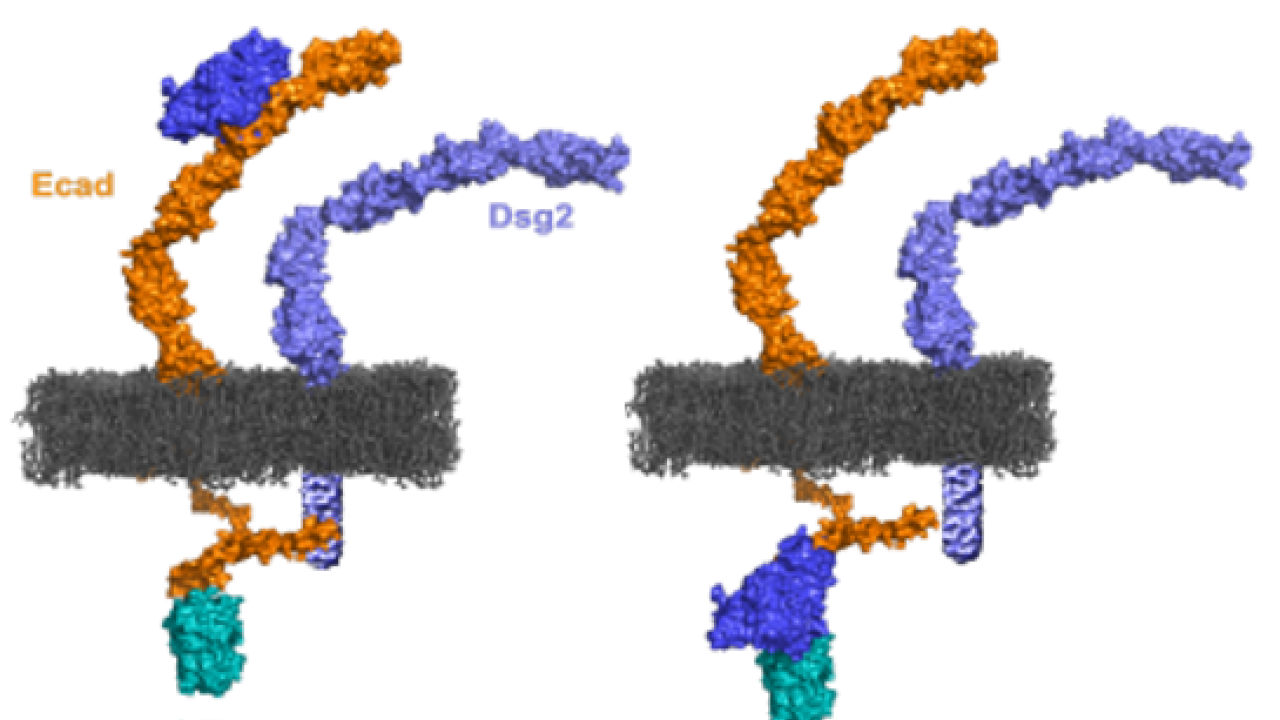 Sanjeevi Sivasankar’s laboratory recently received a second National Institutes of Health (NIH) R01 grant for research into how cells control adhesion, their ‘stickiness’ to other cells or surfaces.

This is one of biological science’s fundamental unanswered questions. No one yet understands how the adhesion proteins on cell surfaces are able to change their function so the cells can stick or unstick in different circumstances. This line of study is relevant for work on wound healing as well as for understanding how cancer cells can unstick themselves from a localized tumor and spread through the body.

The lab currently studies the protein cadherin, which mediates cell adhesion in all tissue. They’ve recently identified how single cadherin molecules are able to control their ‘stickiness level.’

Sivasankar explains, “Cadherins reside on the edge of the cell membrane. The outside part of the protein can interact with cadherins on other cells and the inner part dangles within the cell. By measuring the interactions of single cadherins, we have identified that the outside part of cadherin can stick to cadherin on another cell in two distinct structures: one which is relatively weak and a second which is much stronger.  We have also discovered that when a protein within the cell called vinculin, associates with the inner part of cadherin, the outer part of cadherin goes from a weaker to a stronger structure.”

Mutations in cadherins occur in a number of cancers. The NIH awarded Sivasankar’s lab a previous R01 grant earlier this year to identify how proteins in the cell regulate cadherin adhesion and what goes wrong with this process during cancer.

Sivasankar’s lab also hopes to discover novel adhesive protein interactions in cells. They’re looking into the proteins of the desmosome, an adhesive structure in the heart and skin. Mutations in desmosomal proteins occur in at least one fairly common heart disorder and in conditions that make the skin extremely fragile. It has been difficult to study the desmosome because its protein components are not easy to extract from the cell.

“So, to study the desmosome, a technology is needed to ‘map’ desmosomal components in live cells without disrupting the desmosome by breaking up its components. We have developed a molecular technology that can do this,” says Sivasankar. A few weeks ago he and his lab were awarded a R01 grant from the NIH to develop the technology and study the desmosome. They plan to first identify the key proteins that comprise the desmosome at different stages of its assembly, and then determine how these components form and strengthen the desmosome. He believes this research will have applications that extend beyond this particular project.

“The technology we are developing is ‘general purpose’ and can be used to study most proteins on cell surfaces. For instance, it can be used not only to study desmosomal proteins but to discover new adhesive interactions in cells.”

Sivasankar says that moving to UC Davis’ biomedical engineering department has transformed his research work. He’s been able to establish new collaborations and leverage the outstanding research resources here at UC Davis. As he explains, “The BME department has been extremely supportive of our lab's research and the University is clearly invested in our success. I have worked and trained at many different universities in the US and UC Davis is among the most collegial and collaborative places I have worked.”