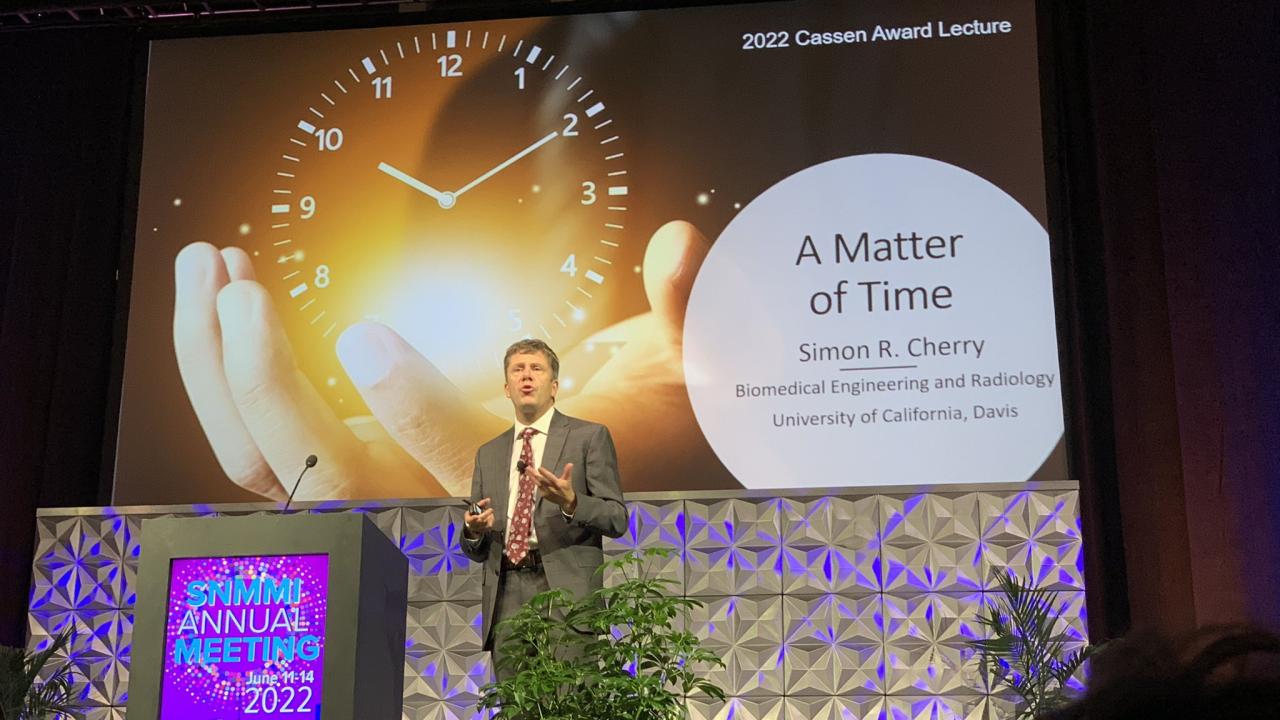 Simon Cherry, distinguished professor in the biomedical engineering department at UC Davis College of Engineering, was recently awarded the 2022 Benedict Cassen Prize from the Society of Nuclear Medicine and Molecular Imaging. Cherry was recognized for his 30-plus-year career, which includes being the co-leader on developing the world’s first total-body PET scanner.

The honor, which includes a $25,000 prize, is awarded every two years by the Education and Research Foundation for SNMMI to recognize outstanding achievement and work leading to a major advance in nuclear medicine science. Cherry, who will receive the award at the SNMMI’s annual conference in June 2022, was recognized for developing novel technologies and methods for quantitative biomedical imaging.

“You don’t do this on your own,” Cherry said. “I’ve had the fortune of collaborating with some tremendous people throughout my career, and, if it wasn’t for them, we wouldn’t have been able to do the work that we’ve done. I would be nothing, nothing without all the other people—the students, the postdocs, the faculty that I collaborate with. I owe them an enormous debt of gratitude.”

Cherry said it is an honor to receive this award at the conference for several reasons:

“If it hadn’t been for the Foundation giving me that grant, I wouldn’t have been able to pursue the preliminary work that allowed me to get larger grants and then launch my career,” he said. “So, that’s what makes it rather special to me—that they are awarding me their top award because they helped start my career as well.”

Lastly, Cherry said the award is significant because of whom it is named—Benedict Cassen. Cassen is the inventor of the rectilinear radioisotope scanner, the first instrument capable of making an image of radiotracer distribution in body organs of living patients, which lay the foundation for the work upon which Cherry has built his career.

“He had this vision of creating a system to take images of organs inside the body. He was really the first person to do this,” Cherry said. “And the project I’ve been working on for the past 20 years now, this total-body imaging project, is basically an extension of his vision. I think he would love to see it if he was still alive because it’s the ultimate scale up of what he started.”

Cherry and the team at The Cherry Lab are internationally renowned for their work on molecular imaging using positron emission tomography (PET) scanning, particularly developing faster and more sensitive detection technologies. The laboratory has developed technologies with widespread applications to improve diagnosis, stratify patients for treatment, and assess response to that treatment. Cherry is also well known for developing and commercializing imaging technology for pre-clinical use in small animals, which universities and pharmaceutical companies use throughout the world for drug testing and treatments. He also conducted early research that led to the development of PET-MRI hybrid scanners used in hospitals worldwide. In 2018, Cherry and colleague Ramsey Badawi created the world’s first medical imaging scanner that can capture a 3-D picture of the whole human body at once. Named EXPLORER, the scanner is a combined positron emission tomography (PET), and x-ray computed tomography (CT), creating entire body images. It also can scan the whole body in as little as 20 to 30 seconds, which is 40 times faster than current PET scanners, or reduce radiation dose by up to 40 times.

At the conference, in addition to receiving the prize, Cherry will present “A Matter of Time”. The presentation will discuss how his work is connected to the history of Benedict Cassen, the importance of imaging over time to quantify a range of biological processes, and latest detector technologies that have a timing precision of well under a billionth of a second, sufficient to allow direct generation of medical images without the usual accompanying computational algorithms.   Cherry will share initial measurements from The Cherry Lab that show that the timing precision needed for this new revolutionary form of imaging is now possible.

The awarding of this lifetime-achievement honor is aptly timed. Cherry recently announced he will be partially retiring in June 2023.

“On the research side, I’m not going anywhere,” Cherry said. “We have funding for the next several years in the lab and there’s lots of terrific people doing really great work. I’m going to officially retire from administration and teaching, but will continue to do what I love on the research side and continue mentoring the next generation of researchers.”

Cyborg Cells Could Be Tools for Health and Environment

All College of Engineering News