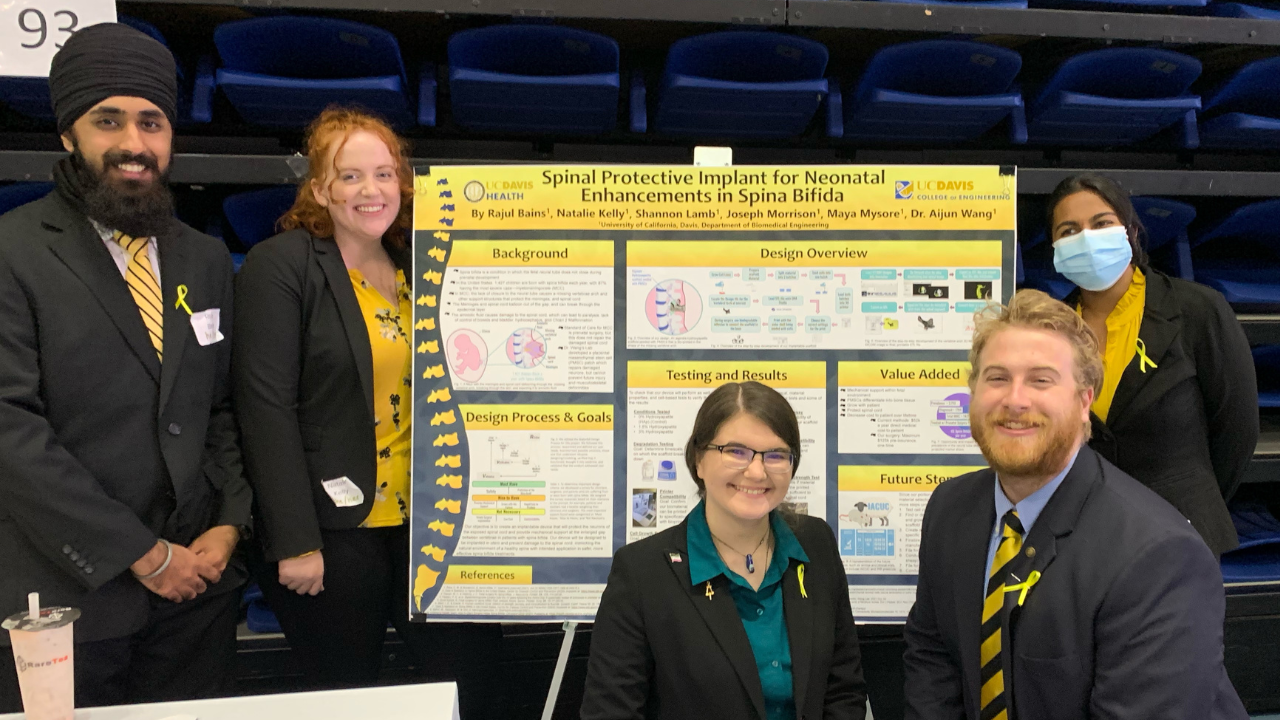 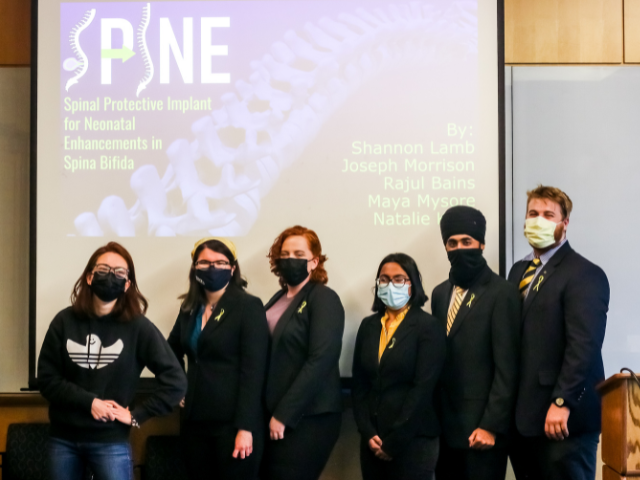 A tremendous work ethic, variety of expertise and the perfect balance of professionalism and fun were the keys to success for this year’s Sandia Engineering Design Award winners.

The award-winning team, named Spinal Protective Implant for Neonatal Enhancement (SPINE), included undergraduate seniors from the Department of Biomedical Engineering: Rajul Bains, Natalie Kelly, Shannon Lamb, Joe Morrison and Maya Mysore. The competitive annual award, which is given at the Engineering Design Showcase, is supported by Sandia National Laboratories and recognizes an outstanding engineering design project that supports the lab’s mission, which is to secure a peaceful and free world through technology.

“It’s amazing to me how much more I like this team after having worked with them on this project,” Mysore said. “But really, there is no way we would have been able to accomplish all that we did in such a short period of time without the professionalism, work ethic and creativity of everyone. I’m incredibly grateful for them and proud to have been part of this team.”

For their award-winning project, the team created an implantable device for patients with spina bifida who are in-utero. Their project built upon the prior work of Professor of Biomedical Engineering Aijun Wang who developed a collagen graft seeded with neurotrophic factors to improve spinal cord function for fetuses with Myelomeningocele, a serious form of spina bifida. Spina bifida is a congenital birth defect that is caused by incomplete closure and development of the fetal spine within the first three to four weeks of pregnancy. It is a defect that impacts roughly 1,400 babies each year.

The device the student team created was aimed at recreating a natural environment of a healthy spine in a way that is safer, more effective and less expensive than the current gold-standard treatment, which involves placing a stem cell patch on the patient in-utero but lacks mechanical support for the spine. The SPINE team’s solution sought to provide mechanical support at the enlarged gap between vertebrae as well as protect neurons from any chemical damage that might be done by embryonic fluids. The team had to consider numerous iterations of devices to ensure it was implantable and biocompatible in utero, and was also capable of stem cell integration for tissue regeneration. In the end, they developed five potential designs of interest: vertebral fusion, expandable stent, cell biomaterial scaffold,  vertebral arch and expanding implant with feeding line.

“Initially we joked that this project was like us doing five different dissertations, but that’s basically what it turned out to be,” Morrison said. “Part of why we won this award was because of how much we accomplished in terms of background research and translating that into presentations and science communications.”

The team said they were able to execute such a complex project thoroughly because of the variety of skills and knowledge each person brought to the team. Mysore focused on the viability of various biomaterials and prototyping. Kelly studied the cell-based aspects of the project such as quantifying the success of cell growth on the different biomaterials. Morrison’s role was bringing insight to the clinical application of the research. Bains served as the primary contact with the project’s sponsor at the UC Davis Medical Center in Sacramento and conducted experiments in labs in Sacramento. Lamb translated MRI images into the 3-D model of an in utero patient’s spine and helped assemble the award-winning presentation.

“To be able to work with everyone’s strengths allowed us to explore avenues none of us would have been able to do on our own,” Kelly said. “So throughout the entire course of this project, I was always really grateful for just how incredibly competent and diverse my team’s skills were.”

Another key to their success was the support they found from people within the College of Engineering including teaching assistant Allison Pickle and Professor Jennifer Choi. The BME student design team also appreciated utilizing space in the UC Davis Translating Engineering Advances to Medicine (TEAM) Lab, the Bioinnovation lab space, and the lab of Department of Biomedical Engineering Chair and Professor Steven George to conduct experiments and make prototypes.

The team said they enjoyed applying four years of classroom learning to a translational research project.

“This is the sort of thing that anyone who chooses to study biomedical engineering hopes that they will get out of their undergraduate degree, which is a chance to work on something that will actually impact people,” Mysore said. “Having been able to do that, through this project, is just the cherry on top of this degree program.