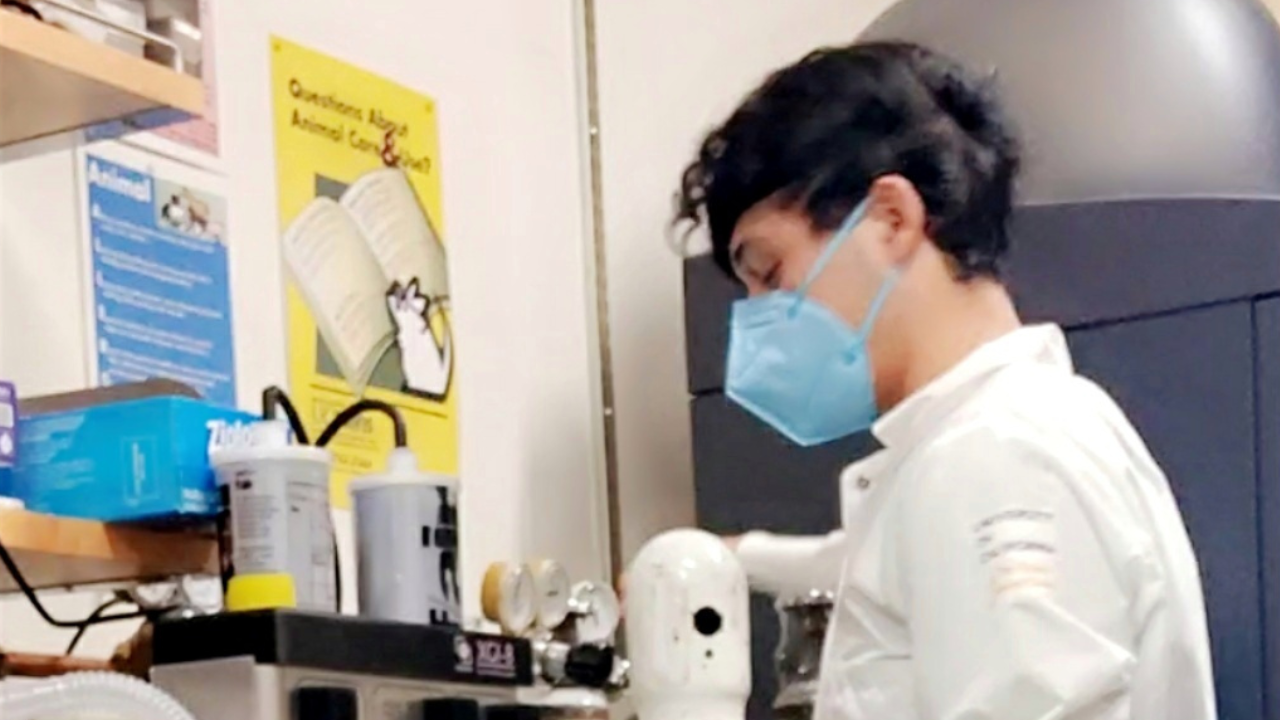 At 16, Alex Vargas made a split-second decision that changed the course of his life.

Growing up in Juarez, Mexico, Vargas was already thinking about university when he was a middle schooler with a passion for math and science. But he never imagined he’d actually get to attend an American university, let alone study for a doctoral degree in biomedical engineering at a school like UC Davis.

Split-second decision to finish school in the U.S.

In 2010, his parents took Vargas and his two younger siblings to visit his aunt in California. On their last day, his aunt suggested he stay with her to finish high school.

Surprised by her invitation, and with his parents’ permission, Vargas agreed.

“When they left that morning, it was like, ‘Wow, they’re gone,’” Vargas remembers. “I didn’t know what was going to happen because, back then, I thought people could just come to the U.S. and study. I didn’t know anything about immigration or visas or how that worked.”

Although separation from his family was difficult, Vargas kept his focus and completed high school.

While researching universities, Vargas began to suspect his undocumented status would interfere with his dream to attend college in the United States. He didn’t qualify for federal loans or financial aid. He couldn’t get a job to save up for school. He started to wonder if finishing high school in California, instead of Juarez, had been a mistake.

An early love for math and science

Vargas’s father and mother instilled in their children a value for education and a passion for science.

“My dad is a mechanic so he was always talking about how combustion engines work, so I always had a keen interest for trying to understand things like light bulbs and electronics,” he said.

In middle school, Vargas won first place in a statewide math competition. By then, he was already researching universities in Mexico and abroad, but with no expectation his family could ever afford to send him.

A shot at the dream to study science

Now that he was in the United States, he decided to apply to UC Berkeley knowing it was a long shot. But he was accepted and even received a scholarship. In his second year, he took a cell biology class where he found his scientific calling.

“I really liked the intersection of biology and living organisms and applying engineering to resolve problems in human health,” he said. “So that’s the path I decided to study.”

After graduating from UC Berkeley, Vargas took some time off from school and became heavily involved with a nonprofit organization called Immigrants Rising.

“It (Immigrant Rising) was a very welcoming community, and I was looking at other people who are also undocumented and thriving and doing all these amazing things,” he said. “That inspired me to apply to grad school and continue my education.”

Beyond the dream – researching immunology at UC Davis

In 2019, Vargas was accepted as a Ph.D. candidate in the College of Engineering’s Department of Biomedical Engineering. He is working in the Simon Lab to research new effective treatments for pseudomonas infections, which are bacterial infections on the skin and lung.

While many healthy people have harmless strains of pseudomonas bacteria growing on their skin, it’s a serious threat to immune-compromised people because it exists everywhere – in soil, water and even fresh produce. And it’s difficult to treat because pseudomonas protects itself from antibiotics with a biofilm, leading to chronically infected wounds that won’t heal. This is particularly problematic for people with diabetes.

Conducting experiments with specially bred, immunodeficient mice, Vargas is working on a new process called “cell adoptive transfer” in which he transfers neutrophils – white blood cells that rush from bone marrow to the site of infection – to the mice, equipping them to combat infection quicker and heal faster.

“Even though this is in a mouse, it still has the potential to answer the questions about the immune system in mammals that can ultimately impact human health,” he said. “Ultimately, this work may lead to treatments that could bring relief and healing to people suffering chronic – and sometimes fatal – afflictions like cystic fibrosis, different types of cancers, cardiovascular disease and common illnesses such as pneumonia.”

A family living out their love for science and education

Vargas’ education is inspiring his family members. Back in Mexico, Vargas’s mother, who had dropped out of school to start their family, went back to finish her own high school education. His brother is completing a bachelor’s degree in electrical engineering and his sister is studying political science.

“Sometimes I talk to them about my work in the lab and the classes that I take. They’re really proud and very excited,” he said. “My mom, she never imagined that things would be able to work out.”