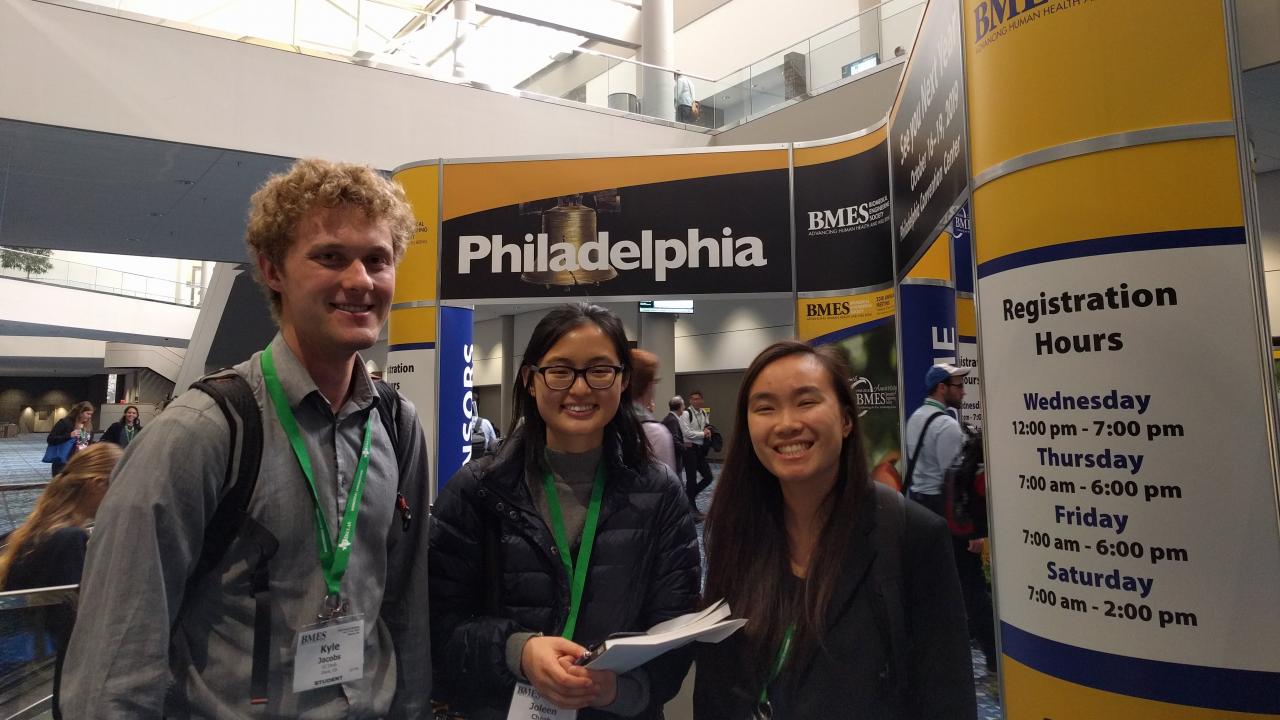 For a long time, it’s been known that cells respond to chemical signals. But more recently, it’s become clear that physical forces also have an effect on cell behavior. If you directly apply physical stimulation to a cell, the cell will change its behavior. The consequences of this important cellular response are evident in muscle tissue; as you exercise, more muscle cells develop. This mechanotransduction (signaling pathways activated by physical stimulation) occurs frequently in many other cell types. So it is clear that cells respond to physical forces, but exactly how is relatively unknown.

One of the key molecules when it comes to mechanotransduction is a fibrous protein structure called the actin cytoskeleton. All of the cells within our bodies have internal skeletal structures made up of protein fibers. Undergraduate researchers in the Yamada Lab discovered that when force is applied to a cell, a protein called cten is recruited to these fibrous structures. Since actin was long believed to be an important part of mechanotransduction, the UC Davis researchers inhibited actin to simply show that cten recruitment required actin. To their surprise, the mechano-sensitive response of cten was still present.

Volkmar Heinrich, associate professor of Biomedical Engineering at UC Davis, developed an instrument that stretches cells using a microneedle. The researchers were able to use this tool to investigate multiple fibrous structures within the cell and found that keratin is the fiber responsible for this response.

“Keratin is not as popular among cell biologists. It’s kind of a neglected cytoskeleton. So this research could potentially uncover keratin to be just as important as others in mechanotransduction.”

Su Hao Lo, professor of Biochemistry and Molecular Medicine at UC Davis School of Medicine, is a cancer biologist who also collaborated on the project. Lo was the first to suggest that Yamada look into cten due to its role in the progression of some cancers. The Yamada Lab will be looking further into this relationship as research progresses.

A brief report detailing the lab’s research thus far was recently published in the Proceedings of the National Academy of Sciences (PNAS) journal titled, “Force-induced recruitment of cten along keratin network in epithelial cells.” Brief reports are a new research paper format published through PNAS. These brief reports, according to PNAS, have an observation of immediate impact that may hold potential to initiate new avenues of research. Yamada shared that they submitted their paper in mid-July and it was accepted within two months. “That’s super fast! That shows that they recognized this as a surprising and unique finding.”

The research team behind this discovery included two outstanding UC Davis undergraduate students: Joleen Cheah, who just started her graduate studies at Stanford University this fall, and Kyle Jacobs who is applying to graduate schools this year. A proud Yamada explained, “Joleen really took over and did all of these experiments like inhibiting actin, finding out it wasn’t actin, then trying different fibers and discovering that keratin was the molecule that cten was recruited to. It’s an awesome experience for an undergrad to go through that whole process!”